We are grateful to everyone who has provided us with information about the various Spaces at CMI. If there are any errors or omissions in the information, please do write to us so that we may correct and add to Our Spaces. If you have information about a specific Space at CMI, we would love to hear from you. Please drop us an email – enquiries@cmi.org.za

The Autism Sensory Garden can be found through the iron gates of the parking at Gate 13. A steep path meanders up to the entrance to the old section of the building.

The Autism Sensory Garden includes a labyrinth. Ronel van Biljon, Principal of The Johannesburg Autism School from 1997 – 2018 recounts, “I visited Vera School for Autism and they had a labyrinth. One of the Autism Spectrum Disorder boys saw me trying to work it out, he took me by the hand and walked me through it to the middle. Needless to say I was extremely touched and wanted one for the Johannesburg Autism School”. John and Bhawna van Reenan generously donated the funds to construct a labyrinth and it is a magnificent feature of the Autism Sensory Garden. 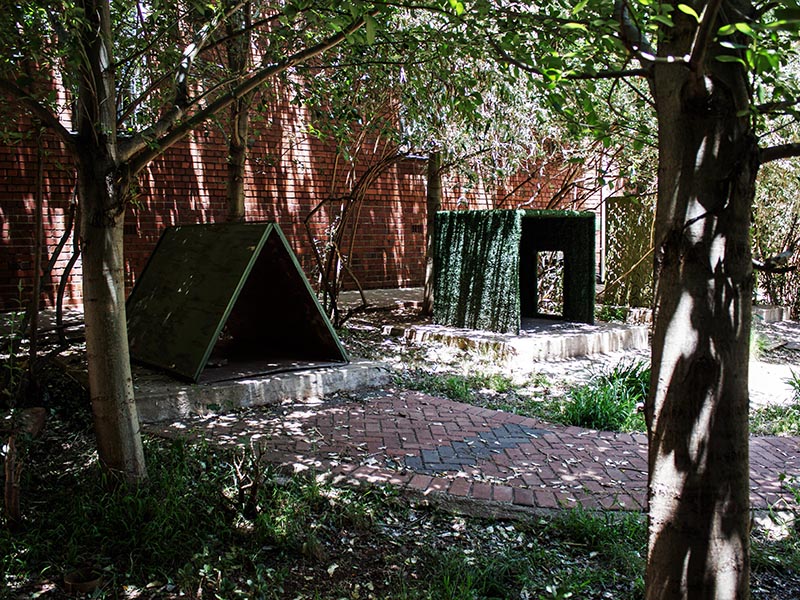 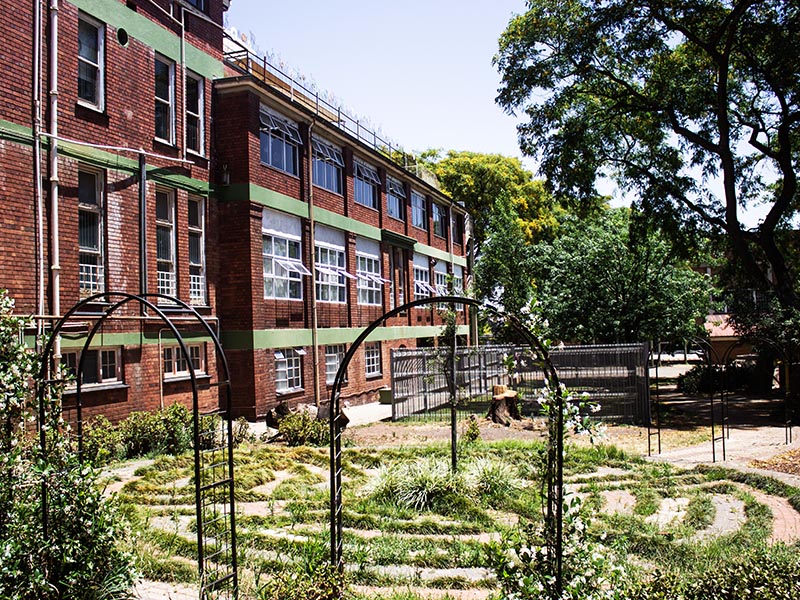 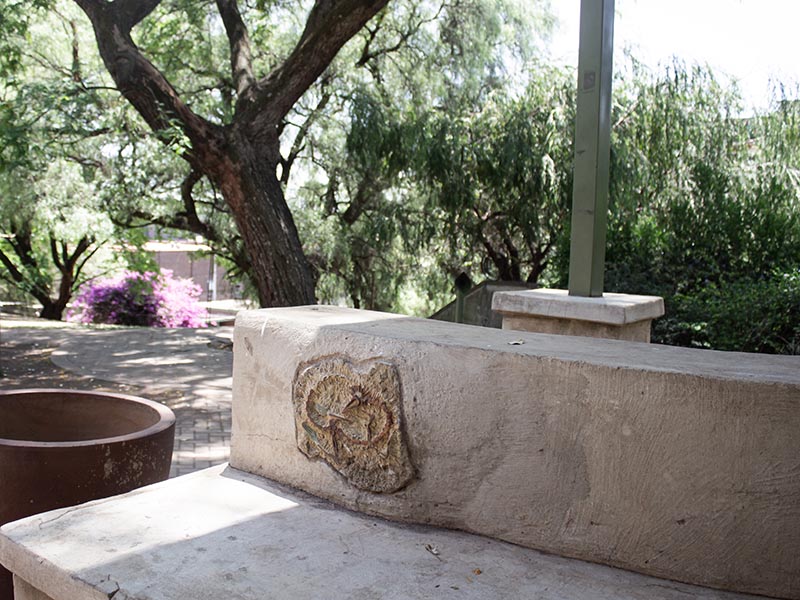 Information provided by Anthony Patterson and from The Golden Book**

The Ruth Drubin Memorial Garden can be found through the double glass doors of the Main Reception Area on the Ground Floor.

"The Ruth Drubin garden was initiated by Professor Lorna Jacklin after Ruth Drubin died. Whilst Lorna was given a brief to convert a largely disused derelict building (except of the laundry – which then ran until the steam boiler failed, the one session per week dental unit and the small child and family unit), into a centre for children with chronic concerns, it was a joint effort between Lorna and Ruth, the then superintendent, that made things happen. Ruth had been with TMI since her initial medical training and remained as superintendent until retirement in the early 1990’s. Whilst she initiated the Golden Book she really cared for TMI as an institution and supported Lorna in any way she could. The garden is many ways was a symbol of respect for what she had achieved." Tony Patterson

Dr Ruth Drubin qualified at WITS Medical School in 1942, she passed away on 26th May 2003 at the age of 85 years. She spent a lifetime in the service of paediatrics, first in the casualty department, Transvaal Memorial Hospital for Children (TMH) for 21 years, then in an administrative capacity as a superintendent of the Johannesburg Hospital for a further 30 years. She was a keen teacher of students, trainee doctors, and nursing staff, and was the originator of postgraduate clinical meetings. After 1968, with the appointment of a professor of paediatrics and the realisation of a full academic department, she played a vital role as hospital administrator, in negotiations with the province, and in facilitating its expansion and consolidation. Professor Hansen, second incumbent of the Chair of Paediatrics, praised her as a great lady who personified the concept of quiet diplomacy. Together they were responsible for the establishment of the Transvaal Memorial Institute (TMI) for Child Health and Development in the buildings of the TMH that were vacated in 1978.

From the GOLDEN BOOK*

Dr Ruth Drubin was the Deputy Superintendent, under her wing, and as part of her responsibilities, all matters pertaining to the Queen Victoria and Children’s Hospitals. These cover everything ranging from staffing and equipment to the number of beds in use, arrangements of the wards, allocation of duties including arrangements for the teaching programmes, scheduling of clinics, and any other needs or requests pertaining to any of the numerous clinical and other departments operating in the hospitals concerned. Fortuitously Dr Drubin has been associated with the TMHC for almost 30 years, first in a clinical capacity from 1945 – 1966, and since then in her present administrative capacity. If anyone knows what makes the Children’s Hospital tick – and helps to keep it ticking – it is Ruth Drubin. It is due to her initiative that the GOLDEN BOOK came to fruition.

**The GOLDEN BOOK was published in 1973 to mark the 50th Anniversary of the Transvaal Memorial Hospital for Children. 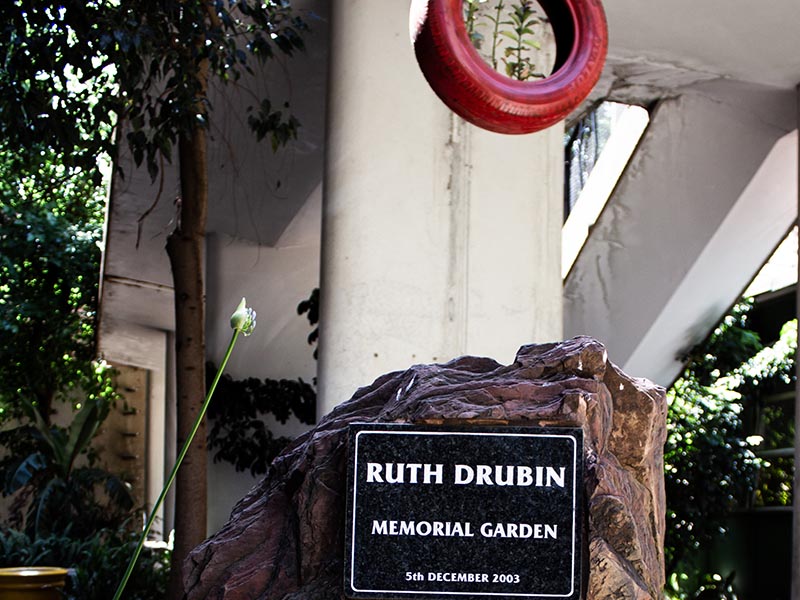 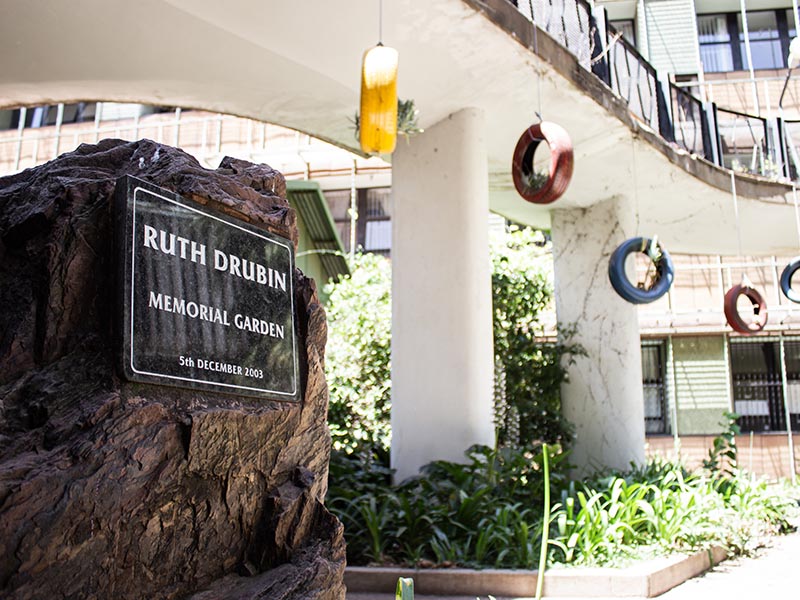 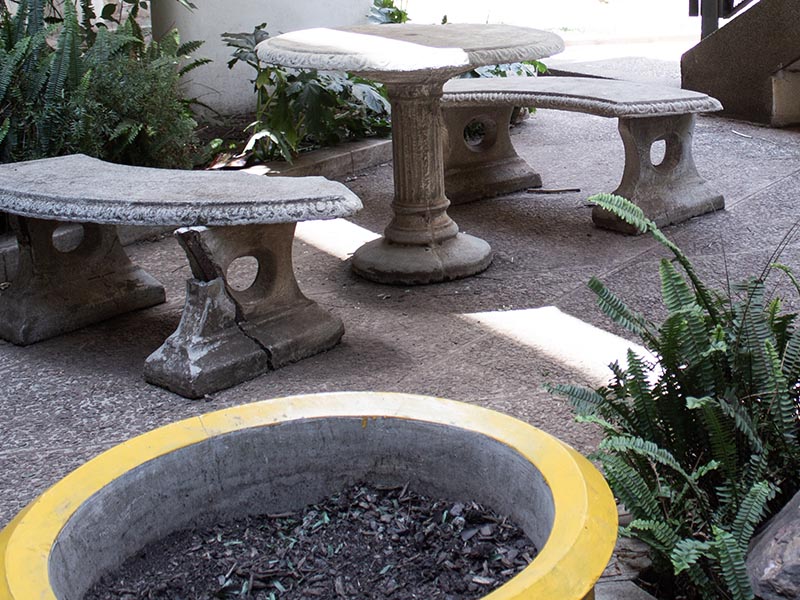 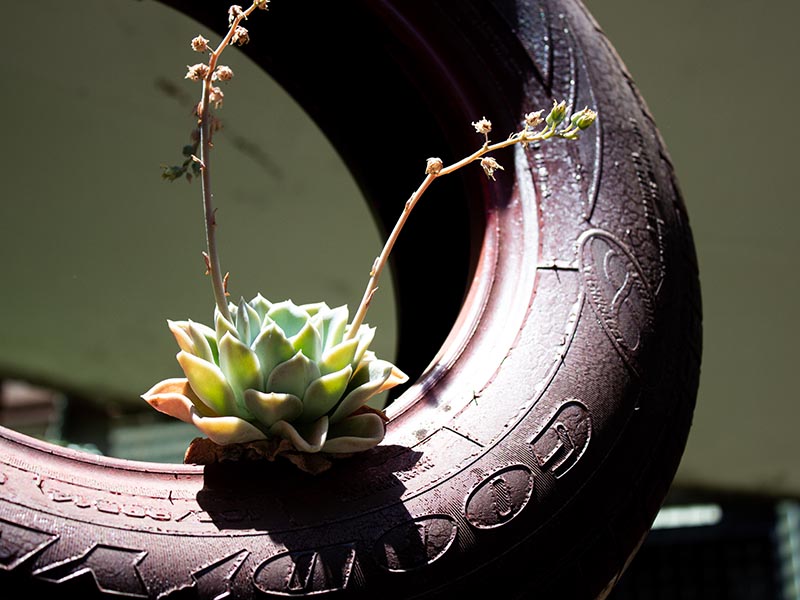 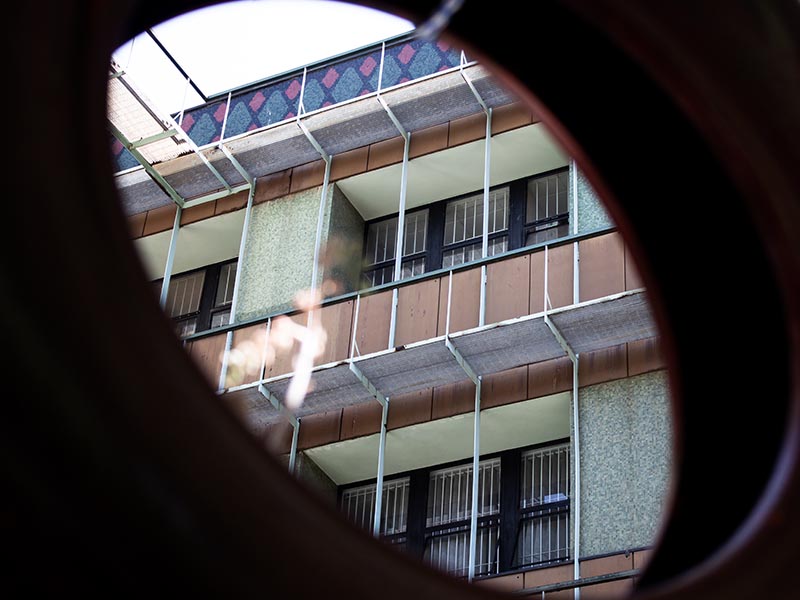 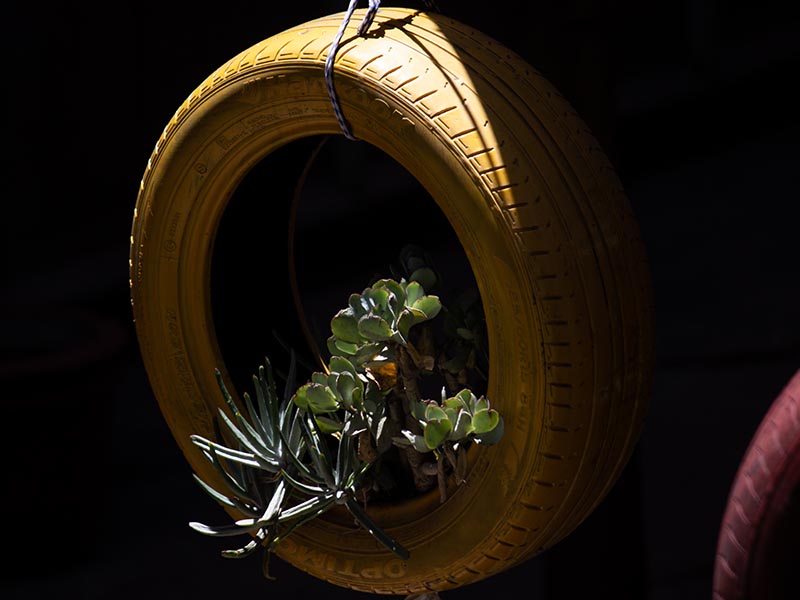 Information sourced from The Golden Book**

Theatre lights and a dental chair can be found at Fight With Insight – on the third floor of The Children’s Memorial Institute. This equipment was from The Dental Clinic.

The Dental Clinic was established at The Transvaal Memorial Hospital for Children in 1968. Dr FR Jackson ran the Dental Clinic from its inception. The Dental Clinic served children from 30 northern area schools – 30 primary schools and 10 high schools and several orphanages. During term time 30 – 40 school children were seen each day and any treatment requiring a general anesthetic was done in the theatre on a Friday.

At the beginning of the school year, systematic visits were done to the schools to examine and select children considered in need of dental care. The school groups were then scheduled to visit the clinic with transport provided by the Transvaal Provincial Administration.

The CMI Dental Clinic, under the care of Dr Anisa Pandor still sees to the dental needs of children based in Johannesburg. It is the only provincial children’s dental clinic in the area and treats on average 500 – 600 children a month ranging from babies to children of up to 12 years of age. The Dental Clinic also has an outreach program where children attending local schools are screened annually. It also screens children from a large number of orphanages in the area.The Dental Clinic no longer has an operating facility at CMI. A large percentage of the patients are less than 4 years of age and are managed with the aid of local anaesthesia. The aim is to have a fully-fledged paediatric dental unit with theatre and sedation facilities to render a fully comprehensive paediatric dental service in accordance with current best practice. The CMI Dental Clinic is situated across the passage from Fight With Insight.

The theatre lights are used metaphorically by Luke Lamprecht – Director of Fight with Insight based on the words of boxing great, Mohammed Ali:

"The fight is won or lost far away from witnesses - behind the lines, in the gym, and out there on the road, long before I dance under those lights."

**The GOLDEN BOOK was published in 1973 to mark the 50th Anniversary of the Transvaal Memorial Hospital for Children. 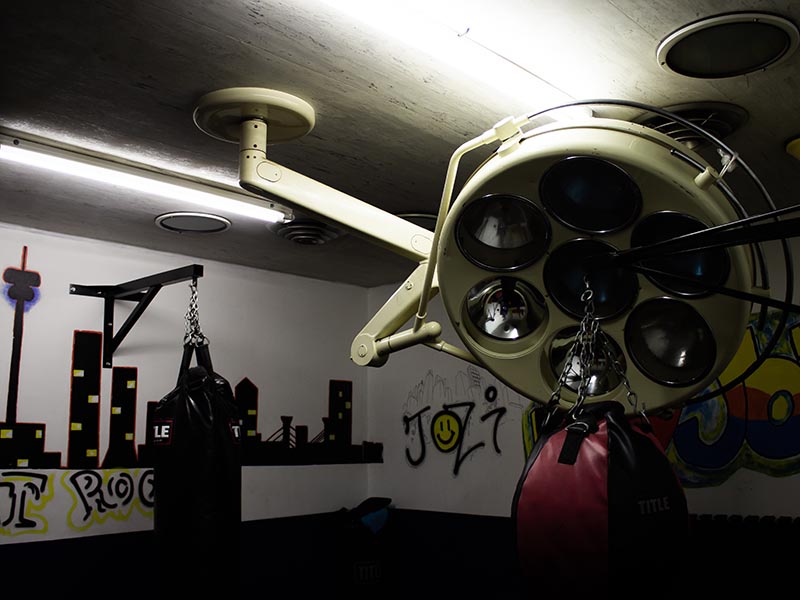 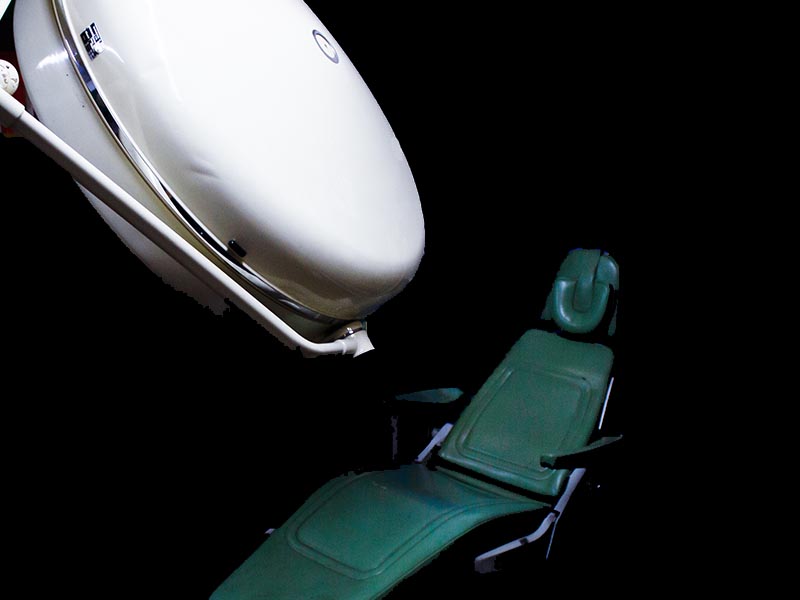 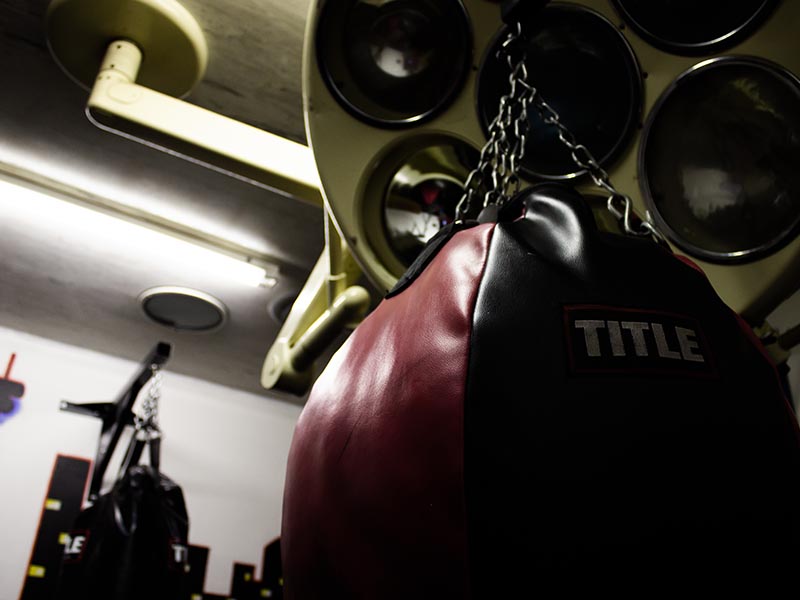 The Jewish and Gentile Mortuaries

The Jewish Mortuary and Gentile Mortuary can be found through Gate 10 at the entrance to Afrika Tikkun.

These two buildings remind us how much medicine has advanced since 1923 when they were built and when the mortality rate amongst children was so much higher.

The chapel-like architecture indicates how solemnly the work was taken here. The presence of the cross in the Gentile Mortuary indicates the assumption that all children not Jewish were Christian. In the days of Apartheid this was a fair assumption since Muslims, Hindusor any other religion would have been cared for at a different hospital.

The Jewish Mortuary is much smaller simply because the Jewish population was smaller. What is clear is that the architects had consulted a rabbi or the people from the Chevra Kadisha who would have taken care of the bodies once the autopsies had been completed. The window to the south of the Jewish mortuary encompasses a large Magen Dovid in glass.

The two buildings are characterised by fine brickwork and careful and sensitive design. They are beautifully detailed enhanced by lancet windows – particularly on the west side of the Gentile Mortuary.

The Gentile Mortuary still has the slabs where the bodies were laid prior to post mortems being carried out. These were made of thick slabs of slate which was used in big homes such as Villa Arcadia for storing meat and milk products to keep them cold during the day. At the south end of the post mortem chamber is what looks like an altar, but if you look carefully you will note that there is drainage at each corner, necessary for post mortems. Daisy de Melker worked as a cleaning lady at TMI and is said to have lost 4 or possibly 5 children under the age of 10, testament to the number of children that died before the use of antibiotics and the benefits of vaccines. 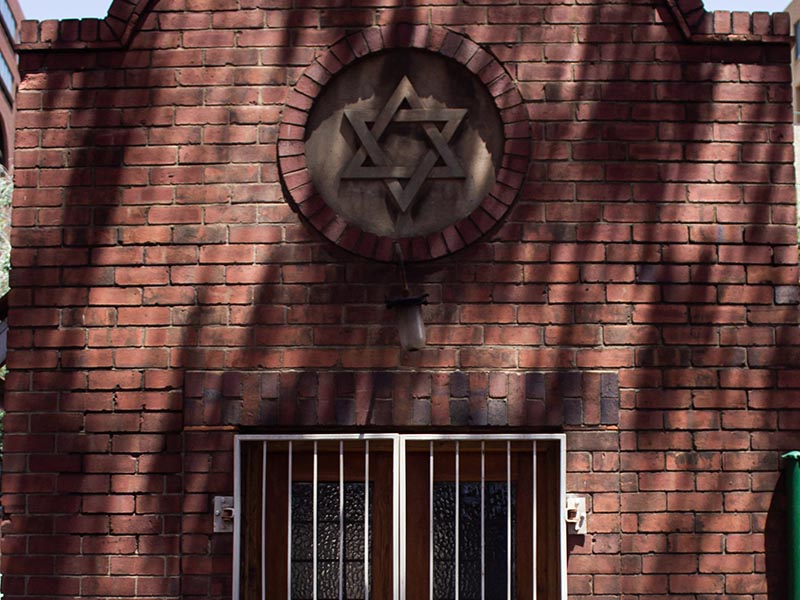 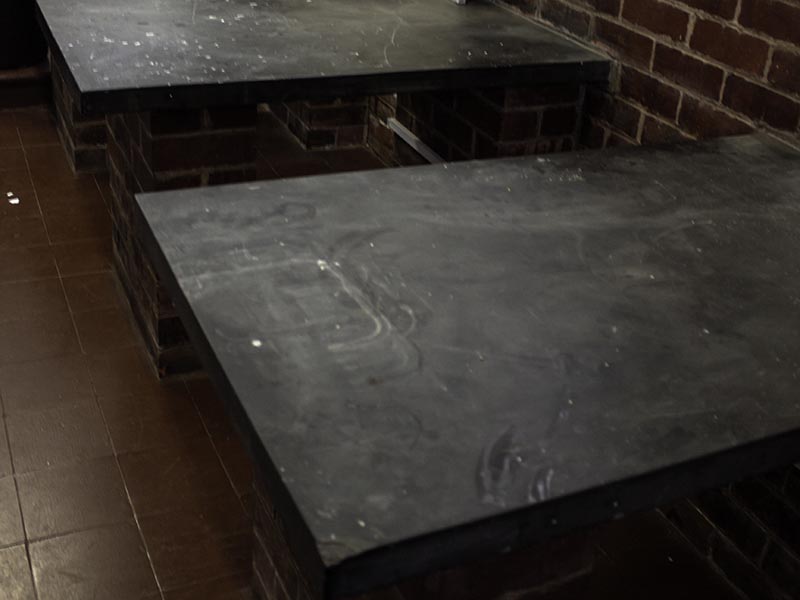 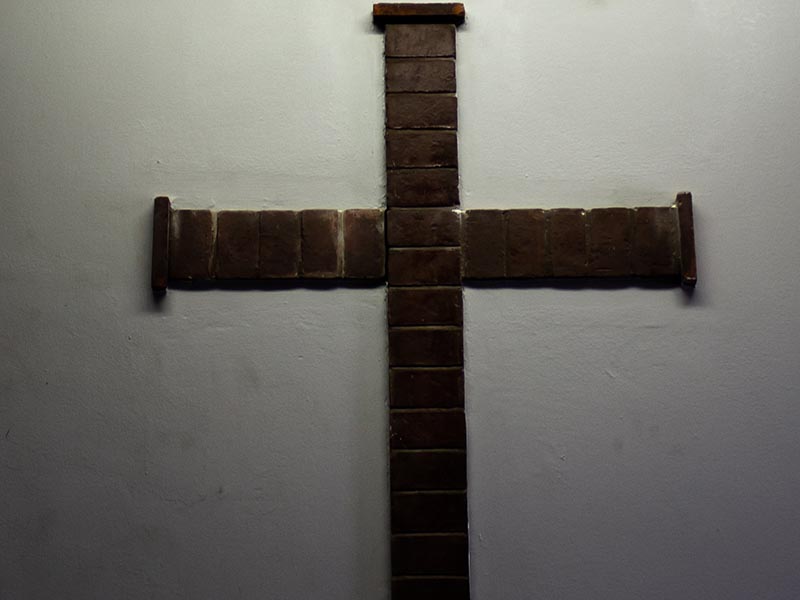